An EU court has agreed to hear a case brought by families across Europe against the bloc for alleged failure to adopt effective laws to tackle climate change.

The lawsuit was launched in May with the plaintiffs asking EU institutions to recognise climate change as a real threat to human rights and strengthen laws to reduce emissions.

The European General Court has now accepted the case, leaving the European Parliament and the Council of the European Union to provide their defense within the next two months.

The families from Portugal, Germany, France, Italy, Romania, Kenya, Fiji and Sweden are asking the Court to rule that climate change is a human rights issue and that the EU is responsible to protect their rights and those of future generations.

They claim that the EU’s existing 2030 climate targets to reduce domestic emissions by at least 40 per cent by 2030 compared to 1990 levels are inefficient to prevent the threat of climate change and protect their human rights.

The European families bringing the case all work in agriculture and tourism in the EU and further abroad and claim that climate change is affecting their livelihood, health, property, and culture.

Extreme weather across Europe this summer has affected many of the plaintiffs, including Sanna Vannar, president of Swedish Saami Youth Association. An indigenous people from northern Europe, the Saami culture is heavily centred on husbandry.

According to Vannar, the recent drought and wildfires that hit northern Sweden are “only a part” of what reindeer herders are facing as a result of climate change. “If we lose the reindeers, the Saami culture will be lost,” she said.

“Many of the saami youth want to be reindeer herders, but they cannot see a future. This is mostly due to the threat of climate change… The fact that the court has accepted our case gives me some hope. We need to act now,” she added.

Armando Carvalho, the plaintiff from Portuguese lost his tree plantations in wildfires last year and is “once again struggling” with this summer’s heatwave and forest fires.

He said: “Since the beginning of this summer, many other people lost their lives and homes due to worsening impacts of climate change. We cannot remain silent to this… and we are glad to be one step closer to be heard.” 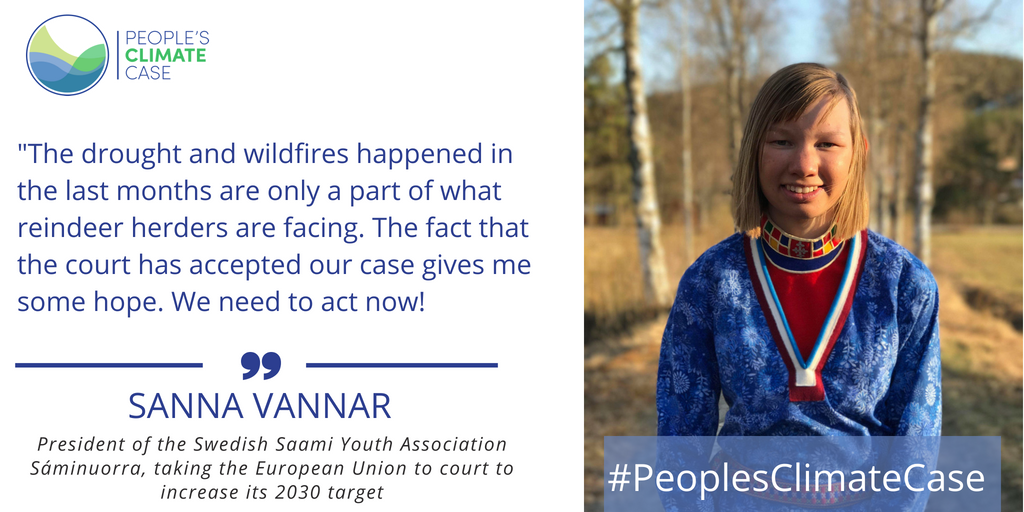 The application asks the Court to void three EU regulations – the Emission Trading Scheme, the Effort Sharing Regulations, and Land use, Land Use Change and Forestry Regulation – that the plaintiffs see as ineffective in lowering emission levels.

The families state that the high levels of greenhouse gases that are still allowed to be emitted through these three regulations do not reflect the effort that the EU could put in reducing emission.

The lawyer representing the families, Roda Verheyen, said that they are putting their trust in the EU legal system to protect their fundamental rights which are under threat of climate change.

“This case is about protecting the people, their livelihoods, and fundamental rights from the worsening impacts of climate change,” he said. “This is a landmark case at the European level and I believe that we have all the necessary evidences to proceed about the impacts on the plaintiffs and the EU’s potential to do more on climate action.”

The families are supported by a range of non-profit organizations, scientist, and citizens who believe that EU can and must be more ambitious regarding its 2030 climate targets.

Wendel Trio, Director of Climate Action Network (CAN) Europe, one of the group’s supporting the families, said that the EU’s existing 2030 climate target is “too low to protect people and their fundamental rights”. He added: “We firmly believe that this court case will prove that the climate target needs to be significantly raised to ensure a safe future for all of us.”

The Irish CLimate Case is set to be heard before the High Court next week Photo: Gary Barber

Over four days next January, the High Court will hear a case brought by the Friends of the Irish Environment against the Government for alleged inaction to tackle climate change.

Ireland has the third-highest level of greenhouse gas emissions per capita in the EU , and emissions are projected to increase by 7.5 to 10 per cent by 2020 compared to 1990 levels.

Speaking at the UN climate talks in Bonn earlier this year, FiE’s Sadhbh O’Neill said that the Irish State “refuses” to take necessary action despite the “consequences” of climate change “already hitting home in Ireland” with the likes of Ophelia and the ‘Beast from the East’.

She added that FiE hopes to build on its success in another case against the Irish Government in 2017, in which an Irish Court for the first time recognised a constitutional “right to an environment that is consistent with the human dignity and well-being of citizens at large”.